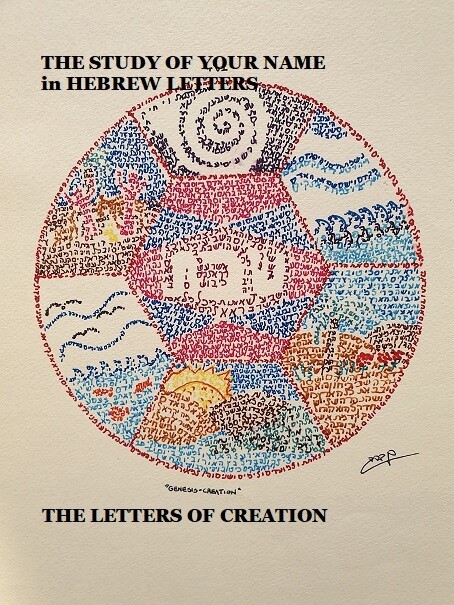 YOUR "NAME IN HEBREW LETTERS " STUDY

YOUR NAME IN HEBREW LETTERS STUDY

SHORASHIM OF THE OLD CITY

The most powerful proof of that can be found in the book of Daniel. That book begins in Aramaic the language spoken in Babylon where Daniel was living. In chapter 7 after describing a vision that he saw that terrified him Daniel writes down that vision in Aramaic, “Daniel saw a dream, and the visions of his mind [while asleep] on his bed; then he wrote the dream and said the beginnings of the matters.”( Daniel 7:1).

Yet abruptly in Chapter eight the text switches into Hebrew. The verse begins In the third year of Balshazzar's kingdom, a vision appeared to me-I, Daniel-after what had appeared to me in the beginning.”( ibid 8:1).

From here on in Daniel is experiencing a VISION ( HAZON ) not a DREAM ( CHALMAH in Aramaic).

A vision or chazon is a direct revelation spoken in the language of the Heavens; Hebrew.

AS A RESULT THE HEBREW LETTERS ARE THE LETTERS OF CREATION

As a result every Hebrew letter is rife with layers and layers of meaning. The Hebrew letters that make up each of our names ( regardless of what language the Name is) reveal whispers of those intricate layer of meaning.

THIS HEBREW LETTER NAME STUDY will endeavor to explore your name and its spiritual impact by exploring the letters of your name.