” The Voice of Yaacov, and the Hands of Esav.” 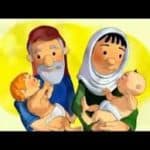 The accepted meaning of Jacob’s ( Yaacov) name in the world is “he who supplants and undermines. Yet nothing could be further from the truth. Those that ascribe that meaning to the name are using the definition that comes from the lips of a man who hated Jacob.

“Esau said, “Isn’t he rightly named Yaacov? This is the second time he has taken advantage of me.” (Genesis 27:36)

Perhaps the adopting of Esau’s interpretation of the name of Yaacov is rooted in some of the same feelings of jealousy and hatred that characterizes Esau.

In reality the name of Jacob ( Yaacov) was given to him as an allusion to a very different set of characteristics and reality.

At the birth of Esau and Jacob we read

The underlying meaning of this description gives insight the essence of Yaakov’s and his descendant’s life journey.

The name Yaacov comes from the Hebrew root LeAkov (to take step after step). Yaacov represented a spiritual strength and ability to trod forward and continue in spite of all obstacles his life journey. “Yaacov” can then be understood as a description of his struggles through the long voyage of exile and return. It is not a name of of weakness or subterfuge but rather connotes faith in the midst of adversity. It is the name of this individual and his people who will faithfully and courageously manage a journey through treacherous paths and unfriendly waters.

On the other hand, the name “Esav” comes from the Hebrew root Asui (done). That is to say Esav lives in the here and now. That is all that is important in his life.

We can understand why Rivka loved Yaacov.She understood his pure heart and simple lifestyle.” Yaacov was an innocent man, dwelling in tents”( ibid 25:27).

Why then did Isaac love Esau? It could very well be that a parents love is also aroused as a protective wall to surround and strengthen a child in the midst of his weaknesses. Yet we sense that there is more

Isaac was able to find holiness in the fields.

“And Isaac again dug the wells of water which they had dug in the days of his father, Abraham, and the Philistines had stopped them up after Abraham’s death; and he gave them names like the names that his father had given them.”(ibid 26:18)

In places where people just saw empty stretches of parched land, he dug wells. That was not just to be seen as a physical activity but actually represented a deep spiritual mission.

Isaac believed in the power of harnessing the physical and elevating it into the spiritual. That was the basis of his love for Esau. “Esau was a man who understood hunting, a man of the field,”(ibid 25:27). Isaac was very aware of Yaacov’s strengths and potential but he also believed that that potential could only be accomplished with the help of Esav’s passionate earthly activism. Regrettably Esau could not envision his purpose in the grander scheme of things

Rebecca understood, by Divine inspiration that the hands on approach of Esau could only lead to arrogance, This was so , unless it was based on the simple faith of a Yaacov. “and the elder will serve the younger.” (Ibid;23)

Yet the union of those two seemingly opposing forces can be dangerous. That is why Isaac’s declaration scarred Yaacov so deeply;

And Yitzchak said to Yaacov, “Please come closer, so that I may feel you, my son, whether you are really my son Esav or not.” So Yaacov drew near to Yitzchak his father, and he felt him, and he said, “The voice is the voice of Yaacov, but the hands are the hands of Esav.” (Genesis 27:21-22).

The hands of the arrogant physicality of Esau without the spiritual humble voice of Yaacov can become a dangerous trap.

“And Jeshurun became fat and rebelled; you grew fat, thick and rotund; [Israel] forsook the God Who made them, and spurned the [Mighty] Rock of their salvation.”( Deuteronomy 32:15)

On the other hand we cannot sit in the tent and wait but rather we must step in to seize our purpose. Instead of sitting back and patiently waiting for G-d’s plan to move forward we need to stand up and move in to seize destiny and move with it forward. Hashem said to Moses, Why do you cry out to Me? Speak to the children of Israel and let them move forward.(Exodus 14:15)

That struggle between those two spiritual approaches will continue throughout time. They will continue in each of us individually and they will played out in the destiny and purpose of mankind.

At the end of time that struggle we read in the book of Ovadia:

“And saviors shall ascend Mt. Zion to judge the mountain of Esau, and the Lord shall have the kingdom.( Obadaya1:21)